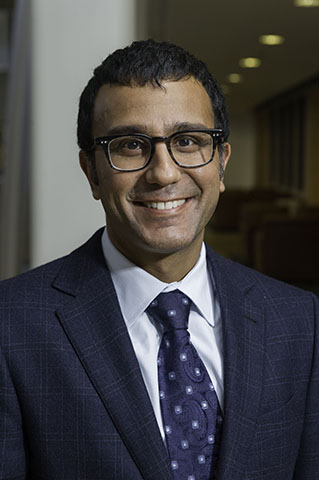 Dr. Kalia is a graduate of the MD/PhD program at the University of Toronto, where he entered the neurosurgery residency program in 2006. During his PhD he discovered novel molecular targets which contribute to the degeneration of dopaminergic neurons in Parkinson's disease. From 2009-10, he completed a postdoctoral research fellowship at the Massachusetts General Hospital Institute for Neurodegenerative Disease, Harvard University. He subsequently resumed residency training and graduated from the Toronto program in 2012 and became a Fellow of the Royal College of Physicians and Surgeons of Canada that year. From 2012-13, Dr. Kalia completed a clinical fellowship in functional and stereotactic neurosurgery at Toronto Western Hospital, and was recruited to the Division of Neurosurgery with a staff appointment at Toronto Western Hospital. He is appointed as an Assistant Professor in the Department of Surgery at the University of Toronto. His clinical focus on the surgical management of movement disorders, particularly Parkinson’s disease, follows as a logical extension of his longstanding research interests. His research laboratory is within the Toronto Western Research Institute and focuses on understanding molecular mechanisms of protein homeostasis in neurodegeneration and on establishing model systems to study protein function in neurodegenerative disease. Dr. Kalia is married to Lorraine Kalia, a neurodegenerative disease researcher and a movement disorders neurologist at Toronto Western Hospital.