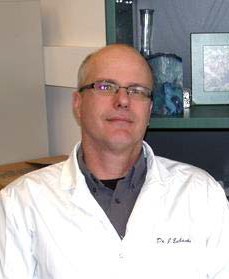 Dr. James Eubanks received his BSc from the University of California, Davis, before going on to receive his Ph.D. in Physiology and Pharmacology in 1991 from the University of California, San Diego. He completed two postdoctoral fellowships in Molecular Neurobiology; the first at Duke University, and the second at the University of Toronto before joining the Toronto Western Research Institute as Scientist in 1994. He later became a Senior Scientist within the Genetics and Development Research Division, a position he has held from 2001 to present. He is currently Professor at the Division of Neurosurgery and the Division Head of Genetics and Development at Toronto Western Research Institute. His research interests include the influence of epigenetic factors on neuronal function, with a particular emphasis on Rett syndrome. He is an Advisory Board member for both the International Rett Syndrome Foundation and the Ontario Rett Syndrome Association. In 2012, he received the Ontario Rett Syndrome Association’s Award of Merit for his dedication to studying Rett syndrome.