Where are they now? - Patrick J. McDonald 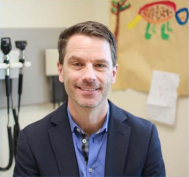 Pat McDonald is one of a growing cohort of distinguished pediatric neurosurgeons trained in Toronto, where all our trainees have exposure to the outstanding neurosurgery unit at SickKids Hospital. Pat graduated from medical school at the University of Toronto in 1992, and after a surgical internship at St Michael’s Hospital in Toronto, joined the neurosurgery residency program at the University of Toronto (1993-2001). He was certified in neurosurgery by the RCPSC in 2001, and became a diplomate of the American Board of Pediatric Neurosurgery in 2014.

In 2001-2002, Pat was the Chief Clinical Fellow in Neurosurgery at SickKids. From 2002-2004, he was enrolled in the Master of Health Science Program at the Joint Centre for Bioethics, Institute of Medical Science, University of Toronto, in the field of bioethics. Bioethics has remained an important part of Pat’s scholarly work since. He has published on ethical issues in surgical research, conflicts of interest, informed consent, ethical issues in clinical pediatric neurosurgery, the ethics of sham surgery arms in neurosurgical research, documentation of ethical process in neuroscience research, adolescent refusal of life-sustaining therapy in neurooncology and physician assisted dying in the context of our specialty.

In 2016 Pat moved to Vancouver to assume the position of Head of the Division of Pediatric Neurosurgery at the B.C. Children’s Hospital, and Alcan Chair in Neurosciences at U.B.C. Pat’s research funding, publications and presentations reflect a broad range of clinical and basic science interests, from ethics and neurosurgical education to neurooncology, hydrocephalus,epilepsy, trauma and injury prevention and gamma knife treatment of a range of conditions. He collaborates with colleagues at SickKids Hospital in Toronto and other centres. Pat has been involved with the ThinkFirst Foundation of Canada, has provided neurosurgical care in Kenya. He has an interest in the care of Canada’s indigenous peoples and those living in remote northern communities.

Pat also serves on the editorial boards of several well recognized journals, and has been involved in the RCPSC examinations in Neurosurgery and the Principles of Surgery. He is active in the leadership of several professional organizations.

Pat and his wife Daniella both enjoy running, cycling, camping and travelling. Pat is learning to play bluegrass mandolin. Daniella teaches English to new immigrants to Canada. Their son Nicholas is doing his BSc at the University of Winnipeg, and is a drummer in a rock band. Daughter Emily is studying psychology at Queen’s University.