Where are they now? - John Kestle 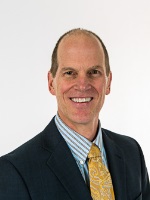 John Kestle is one of our many alumni to choose a career in pediatric neurosurgery, perhaps a tribute to the exceptional training that our residents and fellows have enjoyed over the years at SickKids Hospital.

John obtained his undergraduate degree in Biology at the University of Western Ontario (UWO), now Western University, in 1980, and graduated from medical school at UWO in 1984. After a surgical internship at St. Michael’s Hospital in Toronto (1984-85), John entered the neurosurgery training program at U of T (1985-90). During those years, he also completed the MSc program in Clinical Epidemiology and Biostatistics at McMaster University, supported by the NCIC (Terry Fox Research Fellowship). John next completed a six month fellowship in peripheral nerve surgery at the Toronto Hospital (now University Health Network, UHN) and a one year fellowship in pediatric neurosurgery at the Hospital for Sick Children (now SickKids Hospital) in 1991-92.

John then began his academic career as a pediatric neurosurgeon, first at the University of British Columbia (UBC)(1992-98), where he continued his clinical epidemiology research, becoming Head of the Section of Clinical Epidemiology of the Department of Surgery at UBC (1997-98).

John moved to the University of Utah in 1998, and is currently a pediatric neurosurgeon at the Primary Children’s Hospital, Professor and Vice Chair for Clinical Research in the Department of Neurosurgery, and holds the Max Noorda Endowed Chair there.

John has served on many national and international professional committees and research committees, mainly in his subspecialty field of pediatric neurosurgery. He has over 160 publications in peer-reviewed journals, as well as many book chapters and published abstracts to his credit. He is a frequent presenter and moderator at neurosurgical conferences around the globe.

John and his wife Lynn, a former Wellesley Hospital surgical ICU nurse, have three children, Rebecca, Mat and Brian. The whole family enjoys outdoor activities in the nearby Wasatch Mountains of Utah.