Where are they now? - Charles Matouk 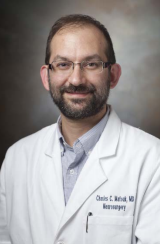 Charles Matouk is one of our more recent graduates, but has already embarked on a promising career in academic neurosurgery.

Charles studied Life Sciences at Marianopolis College (1993) and then completed a honours B.Sc. program in Microbiology, Immunology and Biotechnology at McGill University in 1996, where he won an award for Best Student Research. He then attended medical school at the University of Calgary, graduating in 1999. While in medical school, Charles won several more awards for Medical Student Research.

He trained in the University of Toronto Neurosurgery Program from 1999 to 2009, during which time he did research in vascular biology in the laboratory of Dr Philip Marsden. He was certified in neurosurgery by the RCPS(C) in 2009. During his time at U of T, Charles won the WJ Horsey Prize for Clinical Research, twice placed second in the Morley Prize for Basic Science Research, won the Ellen Epstein Rykov Memorial Prize of the U of T Faculty of Medicine, and earned the Sopman Humanitarian Award at the University Health Network.

From 2009 - 2011, Charles was a Clinical Fellow in Interventional Neuroradiology at U of T, and was a Clinical Associate in Neurosurgery at St. Michael’s Hospital. He then took up positions as Assistant Professor, Department of Neurosurgery, and Assistant Professor, Department of Radiology and Biomedical Imaging at Yale University School of Medicine in New Haven, CT, where he is currently engaged.

Charles has held and holds a number of grants and is involved in clinical trials in the management of aneurysmal SAH, carotid artery stenting, and the treatment of intracerebral and intraventricular hemorrhage. He has been a frequent invited speaker, nationally and abroad, mainly on topics of cerebrovascular neurosurgery. He speaks with increasing frequency at national and international meetings, as well as educational fora at Yale. Charles has been a peer reviewer for grant applications, serves on an editorial board and has been an ad hoc reviewer for several neuroscience journals. He has helped in the organization and planning of scientific symposia and meetings at home and internationally, and serves on boards and committees at Yale - New Haven Hospital. He has supervised several Endovascular Neurosurgery Fellows at Yale. Charles has an enviable and growing list of journal publications, book chapters, reviews, case reports, technical notes and published letters.

Charles is married to Michelle, a former Neuro-ICU nurse at St. Michael’s Hospital. Charles and Michelle have three young children, William (7), Matthew (6) and Caroline (3). They spend any spare time watching the children play hockey or on family ski trips to nearby Vermont.