Where are they now? - Sheila Singh 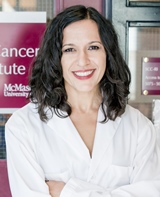 Sheila Singh is another of our graduates to pursue a career in pediatric neurosurgery. She has combined her clinical work at McMaster Children’s Hospital in Hamilton with a very active research program emphasizing stem cell and cancer research. Sheila seems to have achieved the golden mean and been very successful in both professional spheres, dividing her time 50:50 between the two areas, and in her family life.

Sheila obtained a BSc in Neurobiology and Molecular Genetics at McGill University in 1994, followed by an MD at McMaster University in 1997. She trained in neurosurgery at U of T from 1997 - 2007, and in the midst of her clinical training, obtained a PhD in the Surgeon Scientist Program, under supervisor Peter Dirks. Sheila was certified in neurosurgery by the RCPSC in 2006, and then did a fellowship in pediatric neurosurgery at Sickkids in 2006 - 2007, before taking up her position at McMaster University, near her home town of Dundas, Ontario.

When Sheila first joined McMaster, she had temporary support in her clinical work from Dr Rob Hollenberg, who was transitioning into retirement, but she was otherwise the only pediatric neurosurgery subspecialist in Hamilton. Now there are three pediatric neurosurgeons at McMaster, the volume of work has grown dramatically, and Dr Singh is the Head ofPediatric Neurosurgery at McMaster, and also Interim Chief of McMaster’s Division of Neurosurgery. Sheila is now an Associate Professor.

Sheila’s research achievements have been spectacular. She is a Scientist/Principal Investigator at the Stem Cell and Cancer Research Institute in Hamilton. She holds a Canada Research Chair in Human Cancer Stem Cell Biology, and has cross-appointments in Biochemistry, Pediatrics and Neuroscience at McMaster. Sheila and her research colleagues won a Terry Fox New Frontiers Program Project Grant from the Terry Fox Research Institute (TFRI) in 2016, which will provide $2.75M in funding over five years to support research ‘Targeting clonal heterogeneity in treatment-refractory glioblastoma with novel and empiric immunotherapies’. Sheila is the first woman to lead such a program as PI and the first scientist from McMaster to do so. Her co-PIs include Drs S. Sidhu and J. Moffat of the Donnelly Centre for Cellular and Biomolecular Research at the University of Toronto. There are over fifteen people working in Sheila’s lab at the Stem Cell and Cancer Research Institute in Hamilton. Sheila and her team, including graduate students, have been awarded extensive financial support from several prestigious granting agencies, and have spoken and published extensively on their work.

Sheila has been recognized by invitations to serve as a grant reviewer for the NIH, CIHR and has served as a brain tumour expert reviewer for the Pediatric Provincial Oncology Plan and the Pediatric Oncology Group of Ontario. She was a member of the Stem Cell Network AGM Steering Committee of the 2012 Till and McCulloch Meeting, commemorating the fiftieth anniversary of the discovery of stem cells. She is active in the European Society for Medical Oncology among many organizations. Sheila is on the editorial boards of Acta Neuropathologica Communications and of Current Pathobiology Reports. Sheila has given many invited presentations nationally and internationally, serves as the Research Director for McMaster’s Division of Neurosurgery, and in 2017 was made a University Scholar by the President of McMaster and a Canada Research Chair in Human Brain Cancer Stem Cell Biology (Senior Chair, Tier 1). Sheila is a scientific advisor to Arch Biopartners of Toronto.

In addition to her major role with graduate students, Sheila has served on the Residency Program Committee of her Division and that of McMaster’s Pediatric Neurology Residency Program. In 2009 she was Coordinator of the McMaster Surgical Scientist Program. Sheila is also very active inpatient education and fundraising events, giving back for the patient and family support she and her team have received.

Sheila is married to Stevan, an architect who is currently building their new family home in Dundas. They have two sons, Alexander who is 15, athletic and artistic, and Rafael who is 13 and has shown aptitude for science, mathematics and computers, while, like his brother, playing rep soccer and piano. The family travel together extensively, and enjoy ski vacations, especially in Europe.