Where are they now? - Nasri Khoury 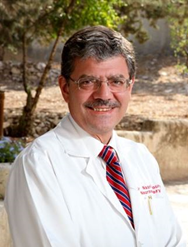 Nasri then began his postgraduate training at the University of Toronto. He completed a straight surgical internship in 1978-79 at Toronto General Hospital (TGH), followed by neurosurgical training at UofT from 1979 to 1984. Nasri was certified in neurosurgery by the RCPS(C) in 1984, and then was the Botterell Fellow in Neurosurgery at TGH (1984-85). After a brief stint as an attending staff neurosurgeon at Sunnybrook Medical Centre (1985-86), Nasri returned home to Jordan, where he has been Director of Palestine Hospital,founded by his father in 1960, and where he has mainly practiced. Throughout his career, Nasri has maintained strong professional and personal ties with Canada.

Nasri has held appointments at Yarmouk University Medical School in Jordan, Jordan University Hospital, St Luke’s Hospital in Nablus, Palestine and the Jordan University of Science and Technology. He has been chair of the Section of Neurosurgery at Al-Hussein Cancer Center in Jordan (2003-2006).

Nasri has been very active in organized neurosurgery and neurosurgical education and accreditation in the Middle East. Indeed the HCAC designation he has earned recognizes that Nasri is a Certified Hospital Surveyor, by the Health Care Accreditation Council of Jordan. Selected positions over his career include Coordinator of a CIDA funded cooperation project involving the Palestine Hospital and UofT, founder, committee member and medical subcommittee convenor for the Society for Care of Neurological Patients in Amman(1986-87 and 2010-13), and three terms on the Executive Committee of the Jordan Neuroscience Society. He has served several times on the neurosurgical subcommittee of the Jordan Medical Council, including as Vice Chairman (2012-2014), and was President of the Society of Jordanian Neurosurgeons (2010-2012). Nasri has represented Jordan at the Pan Arab Neurosurgical Society and the WFNS. He has played a leadership role on the Regional Health Committee in Limassol, Cyprus, and served on the governing boards of several schools and the Episcopal Church in Jordan. Nasri was the Founding Director of the ThinkFirst Injury Prevention Program in Jordan (2005).

Nasri has made numerous scholarly presentations throughout the Middle East on a wide range of topics, from health care organization to neuro-oncology, trauma, peripheral nerve, spinal and vascular neurosurgery.

Nasri and his wife Zina, a former computer scientist, have been married for 30 years, and have 4 children. The eldest, Tala, completed an undergraduate degree at UofT, and then her law degree at Osgoode Hall (York University). Sami holds a degree in chemical engineering from UofT and is currently studying for his masters degree in Healthcare Management in Italy. Daughter Bana completed a finance degree from McGill University and works in Toronto. The youngest, Basel, is studying Neuroscience and Psychology at UofT. Nasri somehow finds time to enjoy scuba diving, swimming and off-road driving. He is an avid photographer, and is planning an exhibition of his work in early 2017.