Where are they now? - John Hurlbert 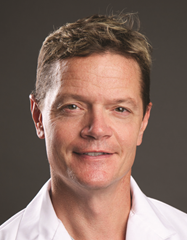 John Hurlbert was born and raised in Saskatchewan, and graduated from the University of Saskatchewan Medical School in 1985. He came to Toronto for rneurosurgical training, and was certified by the RCPSC in 1994. John also earned his PhD in 1993, through the Institute of Medical Sciences at the University of Toronto. He next completed spine fellowships at the Toronto Hospital, as the University Health Network then was, and at the Barrow Institute in Phoenix, Arizona.

During his training John won numerous awards for his research and achievements, including the General Motors Neurotrauma Award for Best Resident Research paper (1990, AANS/ CNS Joint Section on Neurotrauma), the Morley Prize for Best Resident Research Paper (1990, U of T Division of Neurosurgery), the Award of Excellence for Postgraduate Research from the U of T Institute of Medical Sciences (1992), the Horsey Award for Best Resident Clinical research paper (1993), the Young Neurosurgeon Award (1993, WFNS) and has continued to win awards since as an academic neurosurgeon focused on spinal work. As well, many of the postgraduate students that John regularly supervises have won awards for their work over the last two decades.

John has been very active in clinical and basic spinal research throughout his career, and has a focused and impressive list of publications and presentations to his credit.

This coming fall, John is planning to move to Arizona to take up a position as Professor of Neurological Surgery and Co-Director of the Spine Program in the Department of Surgery at Banner University Medical School in the University of Arizona at Tucson.

John’s daughter Jacqueline, aged 26, works in marketing and coaches hockey and will be working toward a master’s degree in Sports Management over the next 3-4 years. His son Mitchel, 24 years old, is about to enter medical school, and aspires to a career in surgery.